By Mr.DEEPAK DODDAMANI - May 02, 2011
MAKING OF ASHWAMEDH KALAMANCH'S  HASYA JATRA EPISODE 1 & 2
The last week of March 2011 was quite filled with positive energy.All the members of Ashwamedh Kalamanch were charged up after the Muhurat and Shooting of Promo of Hasya Jatra.
April month started with good note. Hasya Jatra was welcomed by viewers of Ashwamedh Kalamanch Blog as well as YouTube and Dekhona.
'Hasya Jatra' name was purposely chosen as I knew that at some point we have to switch to HINDI language,as the Marathi speaking viewers are only area specific and internet users Marathi speaking people are limited.But as there was not a single Marathi web-serial on internet we decided to keep Hasya Jatra in both languages 'Marathi' as well as 'Hindi'. Writers can express their feelings better in their mother tounge and that was the second reason why we started with Marathi as 'writing script in Marathi' was much easier for all of us.
Shailesh Humbre, one of our team-mate had provided the backdrop and halogen tube to us from one of his decorator friend Nixon. Abhijeet Sakpal provided us the much needed Butter papers & ring used specially for the light arrangement in shooting.Rest of the property required for shoot were arranged by me and pillars of Ashwamedh Kalamanch.
Pillars of Ashwamedh Kalamanch (Rajendra,Jitendra and Hakim) were the key members for Ashwamedh Kalamanch because all the arrangement for the Unit were done by them. They handled the 'food department' and saved our lot of production cost. It's not an easy task to prepare food for 15-20 members on all shooting schedules. Other departments like writing, directing and casting etc.were handled by Anant Chavan.Abhijeet Sakpal assisted Anant in every aspect. Camera and Editing was my duty and anchoring was handled by Rakesh Dudwadkar. 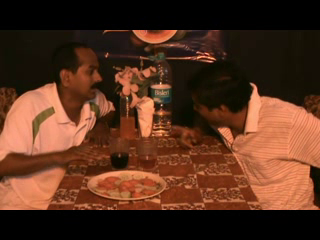 First episode of 'Hasya Jatra' was completely done on improvisation basis. There was no written script.We used RED butter paper in front of halogen to give BAR effect.Dominos disposable tissue papers,bottle of Bisleri, flower pot etc were used to create Table. Chakna of Gajar and Kakadi was arranged on table along with bottle of MIRANDA and Glasses.It was around 4:30 p.m.so we prepared 'tea' for unit.And decided to use BLACK TEA as Liquor in one of the Glass (which Abhijeet is drinking). Rakesh never tasted alcohol in his entire life.But the way he has acted in this episode is really amazing.The chemistry between Abhijeet and Rakesh during this act was good and so the direction by Anant Chavan. There was no scripts so we joined 5-6 jokes/sms on wives and made this act. Our first episode itself was 'Jugaad' :P
But the end product was quite good. 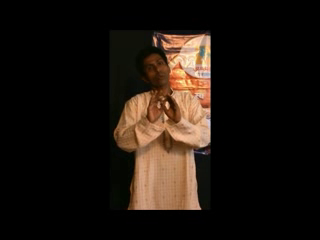 Second episode of 'Hasya Jatra' was just kind of 'ThookPatti'wala act. Due to some reason actors could not complete their commitment to come on the day of shoot.But the show must 'Go on'. Anant came sharp at 10:30 at my place in Virar,we waited till 12:00'o clock for Rakesh.But he could not come due to some personal problem.We had already decided that we have to release two episodes per week,one on Tuesday and another on Friday. I purposely chose Friday,as Saturday and Sunday are our shooting days and I don't have internet facility in Virar.So I upload episode on Friday and others keep sharing it on Saturday and Sunday when maximum people are online on Facebook. So the point is, SHOW MUST GO ON.
Anant had many times performed the Vyanga-act by Shri.Sharad Joshi.He had even saw his guru Soumitra doing such acts in Prithvi theatre. So we decided to go ahead with 'Rashtrabhasha me prem patra ka mahatva'. He had all script by-heart and the act was One Take OK...But later when we released the episode Anant was himself not happy with his performance because he knew that he could have done it more expressively. I experimented with VERTICAL camera and LOCKED frame for this episode,so as to keep all the FOCUS on Anant.
This was the story behind first two episodes of Hasya Jatra....
Thanks 4 reading....
Ashwamedh Group