By Mr.DEEPAK DODDAMANI - May 07, 2011
MAKING OF ASHWAMEDH KALAMANCH'S HASYA JATRA EPISODE NO.7
"Wo baap, baaphi kya jiski koi beti na ho?
Wo Engineer, Engineerhi kya jise koi KT na ho?"
Engineers can never forget their college life.75% attendance requirement,assignments,drawings,labs,experiments,projects,vivas,tests,group discussion etc apart from that friends,canteen,peer-pressure,dreams,success-failures,sports,festivals and the list goes on.I know you will say that this is STORY of every students and not only engineers.So what makes ENGINEERS different from others? Yes 'PRESSURE'.They learn how to manage pressure in their work.So many subjects per semester,that too quite difficult to understand.So don't you think 'EXAM FEVER' will be different for them? Definitely,it's different.And if you are staying in hostel then exam period seems like 'SEASON' in the academic year.
Ashwamedh Kalamanch's Hasya Jatra episode no.7 is dedicated to all such Engineering students.The episode name is 'EXAM FEVER',as the episode is all about the conversations between students during exam period.Many fear Analytical subjects,specially which include lot of calculations.There are many students who even don't know how to use scientific calculators :P,Some students are very serious and sincere.They study regularly and so are under less pressure as compared to students who study at 11th hour.So at the exam time such students becomes 'GOD' for entire hostel.In this webisode of Hasya Jatra Shailesh More is one such scholar student.His room partner Ashish Chavan is like other average students.Rest you can watch by yourself on http://ashwamedhkalamanch.blogspot.com/2011/04/ashwamedh-kalamanchs-hasya-jatra_28.html 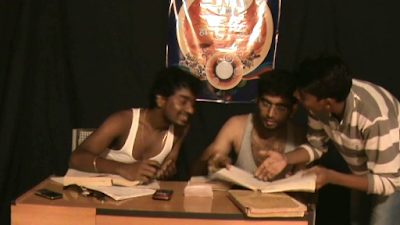 http://ashwamedhkalamanch.blogspot.com/2011/04/ashwamedh-kalamanchs-hasya-jatra_28.html
Compared to previous webisode this act was different in its treatment.I wanted to show the 'EXAM FEVER' as it is and so there was not much scope for any comic scenes. The only comedy was in the punches which should be matched with the attitudes of characters (students) in this webisode. So we worked more on it. And this webisode was completely made for Students only so that they can relate themselves with it.

The act was shoot in 3-4 patches as per the enteries by other hostelite students. So the sequence of 2-3 parts was adjustable except the END which was pre-planned. We just wanted to give message to all the students that 'THERE IS NO SHORT-CUT TO SUCCESS'. We gave Jitendra Patel the chance to anchor this episode as young student anchor was most suitable for this compared to show host Rakesh Dudwadkar.The beginning scene of Shailesh Humbre and Sumeet Mane was addtional scene which was included later just because we have skipped 1-2 good laughter punches on the shooting day which we could not shoot again with Ashish and Shailesh More.

During the shooting Shailesh More was not comfortable with one dialog which had 'PREFER, REFER' combination.He took many retakes to deliver the same dialog.Ashish had done good job as an actor supported by Jitendra,Hakim and myself. It was my debut act.Basically I don't like to ACT but I acted because of shortage of Actors that day.This webisode didn't got good response on our BLOG (http://www.ashwamedhkalamanch.blogspot.com) but become instant hit on YouTube.
Thanks for reading my BLOG and watching Hasya Jatra on regular basis.
Keep reading.Take Care.
Ashwamedh Group