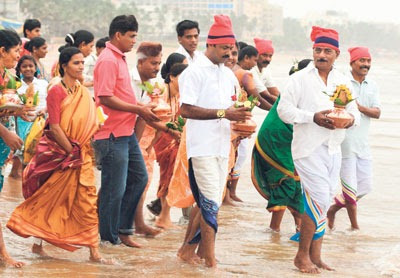 NARALI POURNIMA/ NARIAL POONAM
Indian festivals represents rich & amazing culture of India.
Narali Pournima & Rakshabandhan are the most awaited festivals before Ganesh Festival.Monsoon season in India, particularly month of Sawan (Shravan) comes with many festivals.But the full moon (Poonam) day remains significant as two festivals are celebrated on the same day.
Samudraraja (God Sea) takes 'Rudraavatar' on 'Pournima' due to full moon.And full moon along with Moonsoon makes Sea look more dangerous.Hence to keep SEA 'peaceful' fishermen community offer coconut (Naral/Narial) to sea on full moon day of Shravan (Sawan).Hence the name Narali Pournima/Narial Poonam.
Koli community in Maharashtra is known to all due to its 'Koli dances' and 'Music'.We have seen American President Barack Obama & his wife dancing on the tunes of Koli music. :P
Fishermen are really important part of society as they take all the risks to enter in deep ocean to catch fishes and feed people.Fish is a food of lot of population on coastal regions of India as well as interiors of India. So their relation with Ocean is more of a father and sons. The worship of sea is done to thanks Sea for feeding them & protecting them during natural calamities.
Fisher community in Maharashtra is facing fierce problem now days. The environment related issues are major ones.Coastal areas are more contaminated in seas near major cities,which is hazardous to sea-life.There were many 'Oil spillage cases' in sea in recent years.MV Pavit near Versova is the recent example.
The second major issue is the increasing population of migrated people in fish-selling business.Well this issue has lot of political background to it.
And the third important issue is their 'caste-certificate' issue.Children of fishermen community need 'reservation' under 'particular category' which government is denying from several years. Fishermen can't enter water most of the monsoon season due to coast-guard alerts. They feed their stomachs only on fishing, and don't have any alternative. Hence due to economical problems many children don't even get a chance to opt for 'higher education' in their community.
The contribution of 'fishermen community' to society can never be neglected. Narial is the symbol of purity from inside,and people worship sea with pure heart on occasion of Narali Pournima.
Lets keep environment safe & clean & stop littering on beaches.
Happy Narial Poonam / Narali Pournima to all !!!
e