By Mr.DEEPAK DODDAMANI - September 12, 2011
HAPPY GRANDPARENT'S DAY
India has a beautiful culture,which has always remained fascination for western countries. Joint family system of India kept this culture transiting from generation to generation. But we do have taken many things from West like Friendship day, Valentine's day, Mother's day etc. Grandparent's day is yet to come in India :p, but surely we'll adopt it soon.
We grow with many relations with us. After our parent & siblings next close bond is with our grandparents. Children are always fascinated with bed-time stories which they hear from their Dada-Dadi. Based on this , Director Moti Sagar telecasted one 13 episode serial in 1986 called 'DADA DADI KI KAHANIYAN'. Veteran actor Ashok Kumar (Dada) & Mausi of Sholay (Dadi) tell some Moral based stories in this serial. It had  many actors from Sagar camp who acted in Ramayana. The serial become  so famous that there was one COMICS with same name in Market. 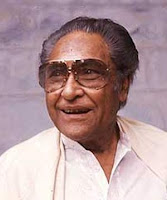 We saw many Dada - dadi's in bollywood playing crucial role in love stories of grandchidren, we also saw them in negative roles wherever 'Khaandaan ki  parampara' was at stake. In KKHH, when little Anjali called her dadi 'Sexy' entire audience laughed. Yes, some times Grand parents become friends too. Then we saw 'Baa' in  Ekta Kapoor's  'Kyunki Saas bhi...' Grandparents started playing crucial roles in TV serials also. Balika Badhu's Dadisa is the best example of this.
However real picture has started changing in our society. We are seeing Grandparents are now staying in Oldage rooms.The importance of grand-parents is decreasing in  Nuclear family system. Even if they are staying with grand-children they are treated like aaya's & caretakers who can be used for doing odd works like paying bills, bringing eggs-bread, carrying children to school  etc.Bollywood movie Baghbaan is real picture of today. We hear many news about old singles getting murdered in their homes in India, as their children gets settled abroad  leaving parents alone here to die.
So SECOND INNING home is what you require for spending your last days and a garden like a Nana-Nani park where you can cherish your memories of life.