By Mr.DEEPAK DODDAMANI - January 06, 2012
ANIMALS KNOWS BETTER
Some of my spooky posts like Atma-the soul and Kashedi ghat ghost received well by the readers. Since then for long time I didn't wrote anything trippy. Perhaps this post will fill that gap. 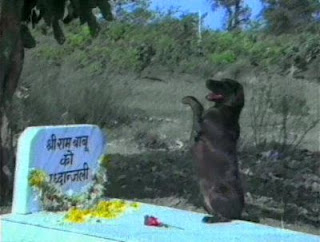 It has been said that the animals have good senses than human being. People feel those animals which can be kept as 'pets' are some of wise animals; as we can train them. Lol... then why Donkey or 'Gadha' is used as synonym for stupid animal? Bats can see in night, so send then as Night-watchman....Oops whats wrong with me? I supposed to write scary things. Yeah well I will stick to it :)
Do you remember Bollywood movie 'Teri Meherbaniya', yeah the same movie in which animals have acted better than Jacky dada :). After that movie I started believing that Dogs can see souls of their dead owners. After some years, someone told me that Dogs can see all the spirits; not only of their dead owners. Some even told me that they cry loudly in night when a human soul comes out of a dead body for the first time. So in my childhood I preferred barking sound of dogs more than crying sound. Also the crying of cats was considered as indication of arrival of Yamraj. The bats doing shirshasan on the trees were considered as the spirits which have been punished by god due to their misdeeds in their lives.Apart from these there were mysterious beliefs about black cats. Ahh...poor innocent animals, they don't even know what human being thinks about them..Or may be animals seriously knows better....
e