Mumbai local trains and the travelers 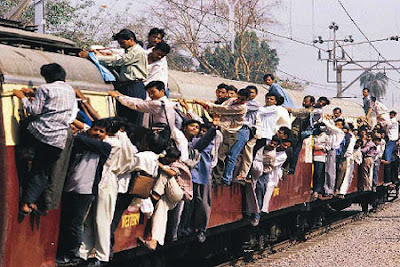 Sorry; as a true Mumbaikar whenever I hear a word 'Travelling'; the crowded local trains of Mumbai comes into my mind. Yes the same local trains with cattle classes (as named by Twittaroor). Year 2004 to year 2008 I stayed in VIRAR. So my daily journey from Virar to Santacruz taught me so much about life in Mumbai.I am born and brought up in Mumbai; I have seen the increasing load on local trains. Local trains are lifelines of Mumbaikars. Economy of Mumbai runs on these railway tracks. Western,Harbor and Central are not mere words in dictionary of Mumbai; these are like Blood groups of our lifeline. But WE people are not cattle. We are human beings who have learned to ADJUST our-self to the crowd of the city.

We come across different people in local trains. Those who have fixed train timings form their groups and soon become close friends of each other. These people enter in running trains and catch their regular seats. Some groups behave as if the whole compartment belongs to them. But in case any aged person arrives they show the courtesy to allow him to sit (which is good thing). It is very easy to make friends in local trains. The groups in the trains discuss variety of topics during their journey. They discuss News, Bollywood,Cricket, Politics and so many other topics. Even if you don't want to involve in their discussion somehow unknowingly you become part of their group. The general reason being; if someone stands up for you and offers you a seat or someone who asks for your newspaper or water bottle or even about the station name (which just passed). But generally after their destination comes; they alight without even saying BYE to you. As thousands of people travel daily in trains and no one has time to remember with whom they chatted on the train previous day. Many times you will find stranger faces giving you smiles. And many times you will find many faces familiar to you, but could not recognize the last meeting.
But you know some people really well. These are the people who sell different things on trains. Do you know why we remember them properly? Only because of their style of selling things. There is one person who sells Ginger-lemon goli in train. He has his unique style. He shouts loudly first, Train me sone ka nahi...Then in rhythm he sings a Hindi jingle made by him to sell his products. and in end shouts again "Paise Nikalo", Paisa nahi ho to baajuwale se le lo. I have heard from the commuters that he own a 1 B.H.K flat in Mira Road. :))
In local trains the other category of people are Bhajan Groups. These people keeps doing Bhajan from Virar to Churchgate.Some call it Ishwar-Stavan and some call it Noise pollution. Many cases are registered by people who think these Bhajan-Mandali are nuisance.
Some people have made local trains their 'Casino'. They play Rammi game (Cards) in trains. Many times Police in civil dresses have took some actions on them but still they could not stop these ontrack gamblers.

Beggars and transgenders are the most important people on local trains. The reason is very interesting. No body bothers who is climbing or getting down from train. But everyone bothers about these people. As they wait these people to reach them near them just to say "NO". And feel relieved once these beggers  get down of their compartments. Some of the commuters never give any Rupee to Child Begger but they definitely donate Transgenders out of fear. Lolz. Some people thinks that they should start day by gaining some 'Punya' and so gives alms to the First begger only. :) So different people have different ways of handling these VIPs of trains.
The other most important person on train is Ticket Checker (TC). In Mumbai TCs don't have guts to enter in crowded trains so they stand on platforms and check tickets.But in afternoon times sometimes 2-3 TCs enter your compartment from different gates and start asking your tickets. No need to fear them if you have your proper tickets :P
On local trains you will find all sorts of funny people. Some play songs on mobiles loudly, some sleep on your shoulders, some spit out of windows, some constantly stare at the girls, some keeps reading newspaper (even in standing position), some eat bhels or chips, some doing stunts on the doors or shouting loudly and teasing people on other parallel track trains. So in Mumbai; local trains are happening places. You should have great strength in your arms and good height if you want to stand comfortably in the crowd. So whenever you will visit Mumbai avoid travelling in peak hours. :))
Articles