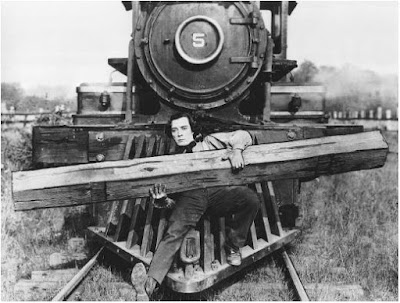 Few months back I saw a photo of Sir Charlie Chaplin (with a wonderful SMILE) shared by one of my friend. During my childhood Doordarshan was the only medium where we could watch some silent era films of Charlie Chaplin.I love his legendary character TRAMP. Thanks to my big brother Govind - he made some characters and cartoons immortal in my memories through his wonderful paintings. He was Sir .J.J. school of Arts college pass out artist with magic in his brush. His favorite hobby was to draw paintings of cartoon characters of Disney.But mine favorite painting was that of The Tramp which he had drawn brilliantly with capturing all his expressions correctly. It was framed and nailed on wall as it was cheerful and full of life. So apart from Charlie I didn't knew any big names of Silent era films. But I am thankful to my friend who shared that picture which made me watch some silent films of Chaplin on YouTube.While watching his film first time I came across a name called 'Buster Keaton'. I watched an edited clip dedicated to him by one fan and after watching his stunts I couldn' stop myself from watching more and more of his videos on YouTube. The next step was of-course to read something about him and I read about him on Wikipedia.In his carrier there were few movies which were milestones and I decided to watch them first. I got so involved in his movies that I am his die hard fan now. I started to take interest in Silent movies and watched some more silent era movies in different genres. I will enlist some of the movies which I loved a lot. Hope you will like them too. No I am not writing any reviews on them...just a plain list.
Silent era movies (my favorite)
1) The General (1926)
2) The Kid (1921)
3) Steamboat Bill Jr. (1928)
4) CityLights (1931)
5) Go West (1925)
6) Modern Times (1936)
7) Metropolis (1927)
8) Nosferatu (1922)

I would definitely like to hear from which of these are your favorites.Do comment.Thanks.
e