By Mr.DEEPAK DODDAMANI - July 30, 2014
FOUR YEARS OF ASHWAMEDH GROUP
During my days of MBA (2008-2010), I and my friend Jitesh Bhilare and Rahul Mahadik used to sit on the bench on the hill top of Kharghar close to Vipassana centre. While studying in B.V.I.M.S.R. Belapur it was our regular practice to drive to that hilly region in Jitesh’s spacious Tata Estate car and sit there watching the greenery in the valley down and discuss our future plans. While Rahul used to talk a lot about his dreams of owning a sports car, a luxurious apartment in the heart of Mumbai and a lovely beautiful girlfriend, I and Jitesh used to discuss ‘Entrepreneurship’ and ‘Self-Employment’ frequently. In the mid of final year of MBA a blurred picture of ‘ASHWAMEDH GROUP’ started taking shape in my mind. It was my over-ambitious thought to start a ‘Conglomerate type’ of Organization which will work in the fields of Media, Education and Social Sector simultaneously which I discussed with Jitesh but hailing from Hospitality field Jitesh was interested more in Hotel and Restaurant kinds of Businesses. We started working on researching for his plan first. We discussed many concepts like franchisee of some food chain, fast-food centre, tent-type tourist accommodation etc. To understand the business plans of these businesses we also visited MSME in Andheri and read and xeroxed many business plans. But as the campus interviews of colleges started we decided to focus on studies and stopped our ‘entrepreneurship-related meetings’. Days passed and one by one we all three friends started working with some organizations. Rahul was happy with what he was doing but I and Jitesh kept meeting on regular intervals to motivate each-other for the ‘self-employment risk’.
I was too quick to realize that I am not born to do 9-5 kind of Job and won’t be able to work for others for longer time; I decided to quit my Job as a Marketing Manager of NIIT Vasai and pursue my dream of entrepreneurship. I left my job in July 2010 and in the same month decided to start an Organization which will work for Children. Being a co-founder of coaching classes in Santacruz from year 2004-2008 small business was not new for me, but still I was anxious about ‘how to go about new venture’. I neither had money in my pocket nor a business plan in my mind. So I decided to adopt a ‘EVOLUTION’ strategy. Whole human race is product of Evolution so why can't I allow to let my Organization evolve the way it wants to get evolved? I wanted to start a ‘Social Enterprise’ and so without team it was not possible at all. In the months of June and July 2010, I approached many friends and discussed my plan with them.
In inception, this was the teams I formed
Ashwamedh Kalamanch: Rakesh Dudwadkar, Ajay Kadam and Anant Chavan
Ashwamedh Foundation: Jitesh Bhilare, Rahul Mahadik
Ashwamedh Sports Club: Jitendra Patel, Rajendra Balsara and Abdul Hakim Ansari
We all invested some capital amount to start our work and this way Ashwamedh Group was formed. We celebrated its inception on 1stAugust 2010 after we got permission from my School ‘Samarth Vidyalaya, Vidyanagari, Santacruz’ for  ‘All Mumbai level Drawing Competition’ our very first event. And this is how 1stAugust was decided as ‘FOUNDATION DAY’ of Ashwamedh Group. 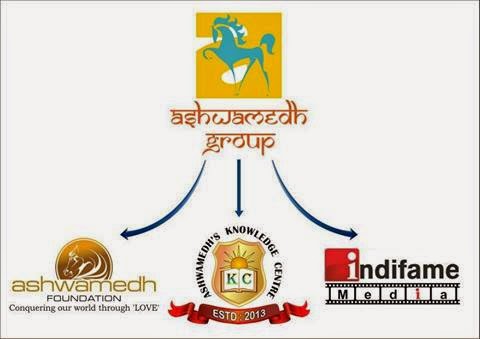